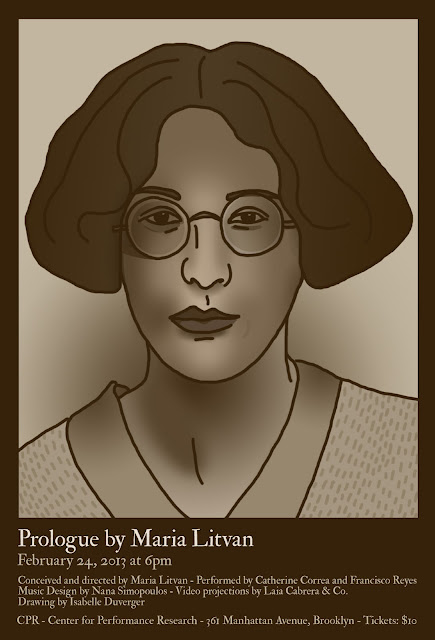 Prologue is a tribute to French philosopher, mystic, and social activist Simone Weil (1909- 1943). Simone Weil, described by Albert Camus as “the only great spirit of our times” and by Susan Sontag as “one of the most uncompromising and troubling witnesses to the modern travail of the spirit.” Weil had an extraordinary capacity to dwell within highly philosophical and metaphysical thought, while still emphasizing the importance of embodied experience. She realized that in order to theorize about the working-class, one had to experience their reality firsthand. Thus, despite her poor health conditions, she left her teaching position to work in a factory. Weil’s passionate nature also drove her to participate in many of the political affairs of her time. She confronted Trotsky, fought in the Spanish Civil war, participated in the French Resistance… But, even more unusual for a leftist intellectual of her time, Weil’s interests increasingly focused on religion and mysticism.

Most of Simone Weil’s writings are annotations of thoughts following her own mental associations, thus reading them is like entering directly into Weil’s stream of consciousness. Inspired by her writings, Prologue is a composition of moments – snapshots into Weil’s life and thought. It is an invitation to enter her world from a personal and sensorial experience. Simultaneously, as an actor prepares to interpret Simone Weil, Prologue reflects on the mystical and artistic processes, and the important role of the invisible in the construction of meaning.
Posted by Isabelle D. at 11:45 AM No comments: