Pictures & Press of Self on the Shelf Immersive Interactive Installation 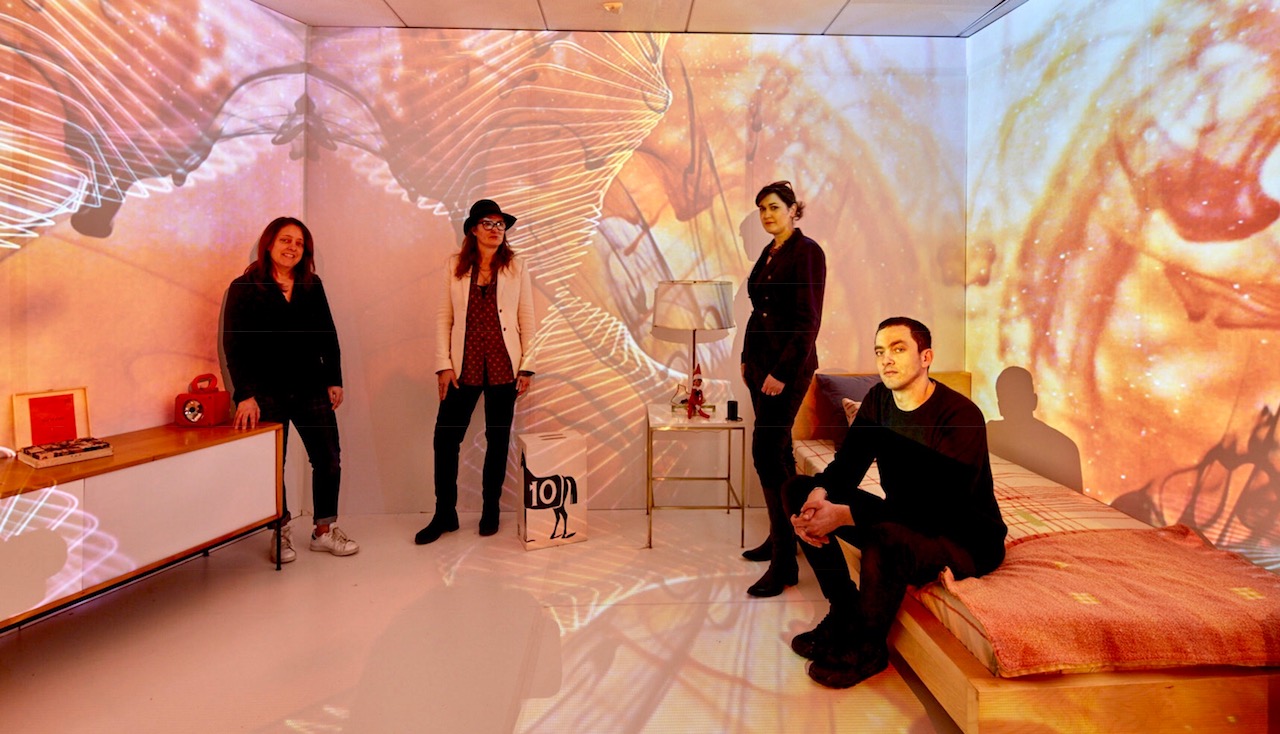 Buy our artworks at springbreakartfair.com

Watering the Imagination at the Spring Break Art Show
"Several other exhibitions were visually compelling or inventive, or so fully realized that I couldn’t help but spend the necessary time to suss out their meanings. The show Self on the Shelf was one of those technology-driven extravaganzas, when I touched a black dot on a quotidian furnishing in what was designed to look like a bedroom, the whole scene shifted and music and images wafting across the walls made me feel like by touching the button, I had entered a wormhole."
Seph Rodney for Hyperallergic, March 8, 2018 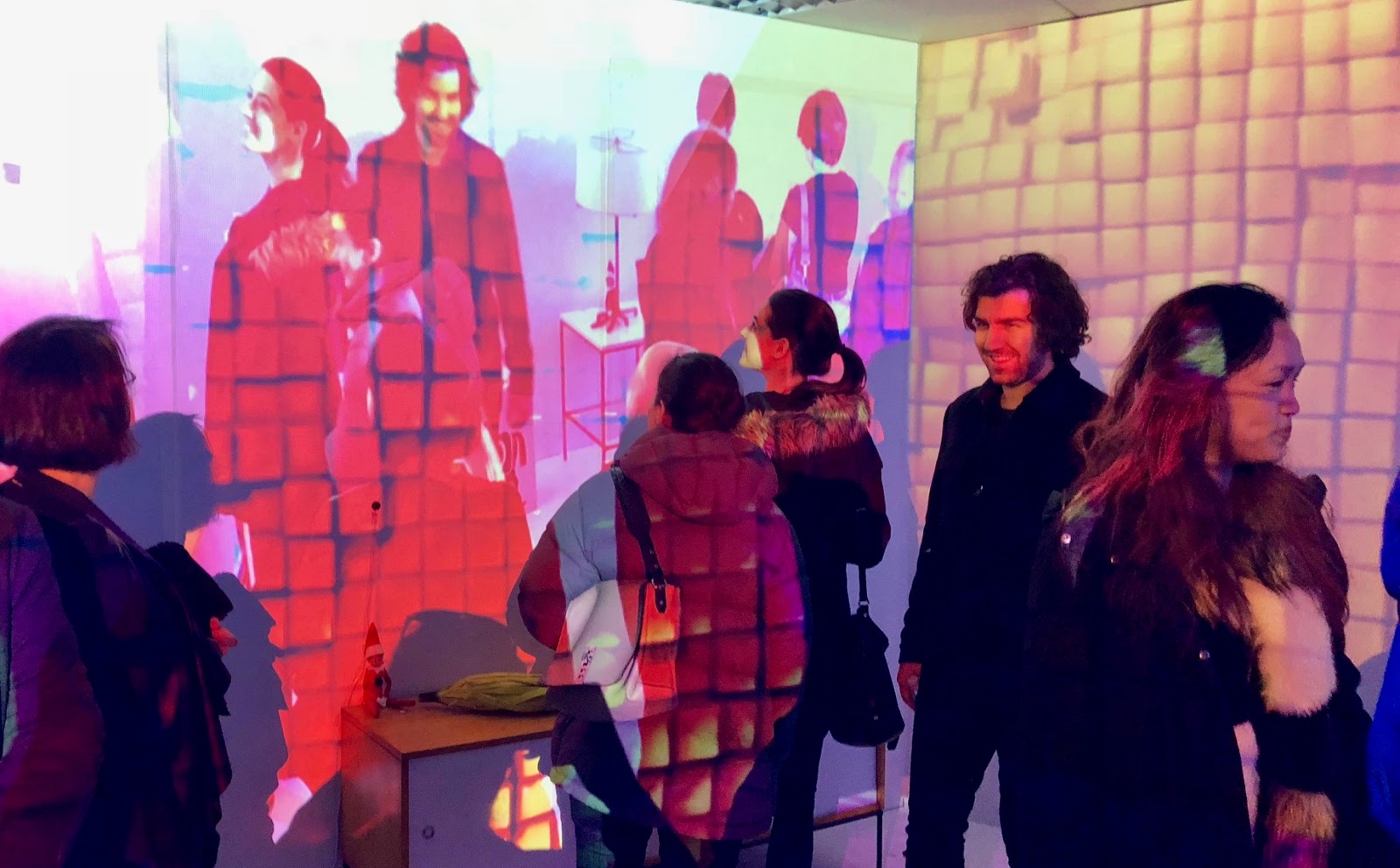 Our 21 Favorite Moments From SPRING/BREAK Art Show
"This year’s theme, “Stranger Comes to Town,” explores tensions of otherness, through concepts of migration, assimilation, and the nature of belonging.
We’ve selected some of our favorite booths, moments and encounters at this year’s show:
Laia Cabrera and Isabelle Duverger, Self on a Shelf"
Kristina Adduci for Art Zealous, March 7, 2018 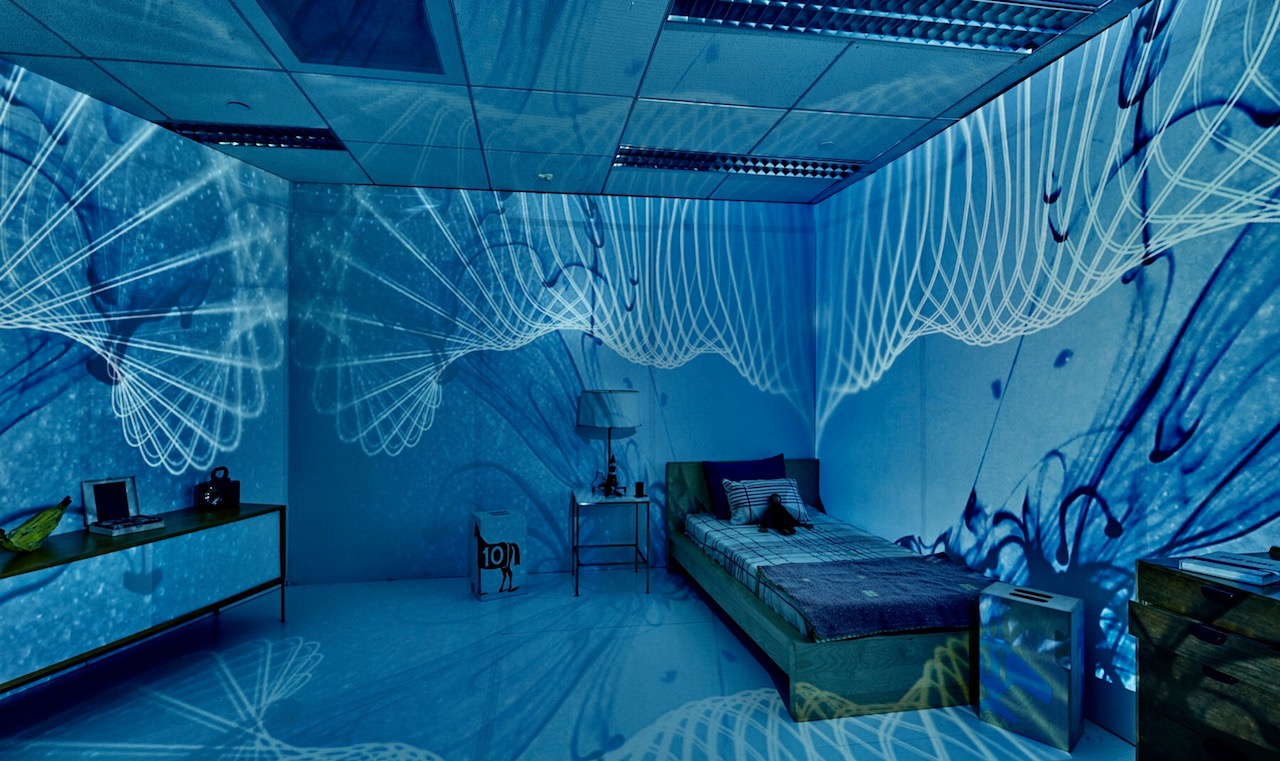 Spring/Breaking The Art-Fair Scene In NYC
Another unforgettable stop was “Self on the Shelf”, an Immersive Interactive Video Art installation by Laia Cabrera & Isabelle Duverger curated by Christine Miele. For this year’s Spring Break they turned a small boy’s bedroom into “a nightmarish dreamscape in honor of the eponymous elf which has become the symbol of our children’s intimate acceptance of 21st century surveillance realities” as the statement describes.
Laia Cabrera and Isabelle Duverger have a long successful history of transforming spaces with their immersive interactive projection mapping, video art, sound design, illustration and animation, all designed from scratch by them. Their robust career includes theatre scenery, cinema, cultural events and of course, exhibitions, to mention a few. For ‘Self on the Shelf’ they collaborated with interaction designer Nicola Carpeggiani in response to ‘A stranger comes to town’ exploring the conflicts of otherness and the nature of belonging, by bringing the child’s bedroom to life while the space reacts to the visitors’ actions.
Both artists and curator converse with the audience, and explain the piece’s origin as they are all inundated by the ongoing dramatic visual effects transform the space blurring the lines between reality and fantasy. Extracted from a 2012 journal entry about Chris’ son and his relationship with James, his first Elf on the Shelf, the concept of this stranger from the North Pole was born.
“Spring Break art show is a very unique art fair in the sense that it is organized around one theme, this year being “Stranger comes to Town” based on the adage “There are only two stories: a hero goes on a journey; a stranger comes to town”. Through the exploration of trust and belief, mystery, and childhood, we wanted to explore the role a stranger may play in conjunction with a power dynamic through the lens of a child. The room, reminiscent of a child’s bedroom, is transported through memories, emotions, and experiences via projected mapping, film, video, sound, animation and visual art.
It’s a spectacle on itself to observe the audience interact with the room, decipher where to touch and observe the visual effects, as well as the story behind them. Children and adults, or artists and the general audience all move around the space with a different approach and reactions. ‘In this context, our site specific installation was very labor intensive once getting into the space, and we’ve worked successfully around the clock to provide the visitors the best experience of our interactive video and sound installation.” Undoubtedly this particular booth is a trip on itself, making the rest of the environment temporarily disappear and becoming a door to an alternate universe.
I leave the fair still believing in the real relevance of art. Thank you Spring Break Art Show for keeping us sane through art-supermart season.
Sara Catalán – The Overart for Hysteriart, March 27, 2018

Self on the Shelf. Immersive Video Art Installation / Spring/Break 2018
Self on the Shelf - Stranger Comes to Town - NYC 2018 at Spring/Break Art Show New York 2018 is an immersive art installation that is based on the children's picture book “Elf on the Shelf”. The artists Laia Cabrera and Isabelle Duverger, in collaboration with the interaction designer Nicola Carpeggiani, have created a child's bedroom and brought it to life as it responds to a series of clues and prompts, which are given to visitors as they enter the room.
Vernissage TV, New York, March 6, 2018 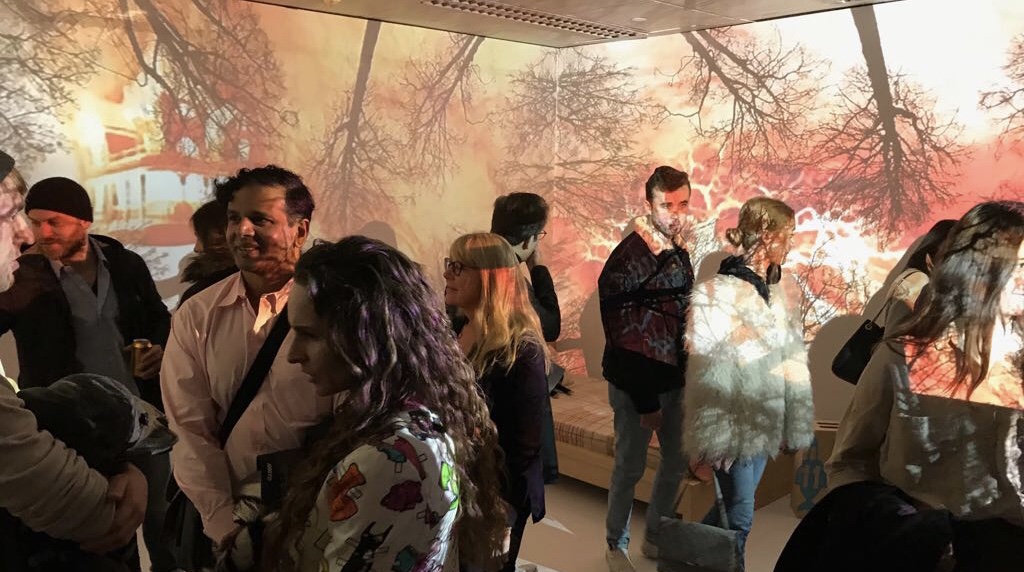 Politics, Strangers & Art Not to Miss at Spring/Break 2018
“Self on The Shelf” by Laia Cabrera and Isabelle Duverger. Curated by Christine Miele.

"Self on The Shelf was a distinct departure from the installations and room presentations that dominated the fair. Presenting as a child's bedroom, the work was enlivened through the act of finding and pressing a black button to present a series of changing environment that combined a childlike innocence with adult self-examination that didn't scour. In an unexpected twist, the work contained a live projection component so participates could see themselves appear on the walls as part of the art installation. It's all part of the dreamlike environment and secret places that is more nice than not.
Self on The Shelf was dreamed up by a pair of visual artists with skills in projected mapping, film, video, animation and visual art. Experiencing the installation was not nearly as complicated as the list of skills needed to create the fanciful work. The work is inspired by a childhood toy by the curator's son. His "Elf on the Shelf" was a toy that was a stand in for Santa Claus and, as part of his Christmas team, could report back on whether he was naughty or nice to determine the level of gifts delivered on Christmas Eve.
The Self on The Shelf can transform into both sweet dreams or nightmares where elves take over the room or storms envelop the room. Other actions will create the room to transform into a pool, a drawing that unfolds or to place the visitor in the room as way of looking themselves in the mirror.
Overall, the installation was a fun breathe in an art fair with work that could be heavy on the heart or harsh on the eyes."
Pat Rogers for Hamptons Art Hub, March 10, 2018 Spanish filmmaker Laia Cabrera and animator / videomapper Isabelle Duverger co-create an interactive immersive installation for Spring Break Art Show 2018.
"Through immersive interactive projection mapping, video art, illustration and animation, Laia Cabrera and Isabelle Duverger, in collaboration with interaction designer Nicola Carpeggiani, have created a child’s bedroom and bring it to life as it responds to a series of clues or hints, which are given to visitors as they enter the room, turning into a nightmarish dreamscape in honor of the eponymous elf which has become the symbol of children’s intimate acceptance of 21st century surveillance realities.
Extracted from a 2012 journal entry about curator Christine Miele’s son and his relationship with James, his first Elf on the Shelf, the concept of this stranger from the North Pole was born. The dramatic visual effects transforms the room as the viewer explores feelings, emotions and limits between reality and fantasy."
Spain Arts and Culture, March 6, 2018 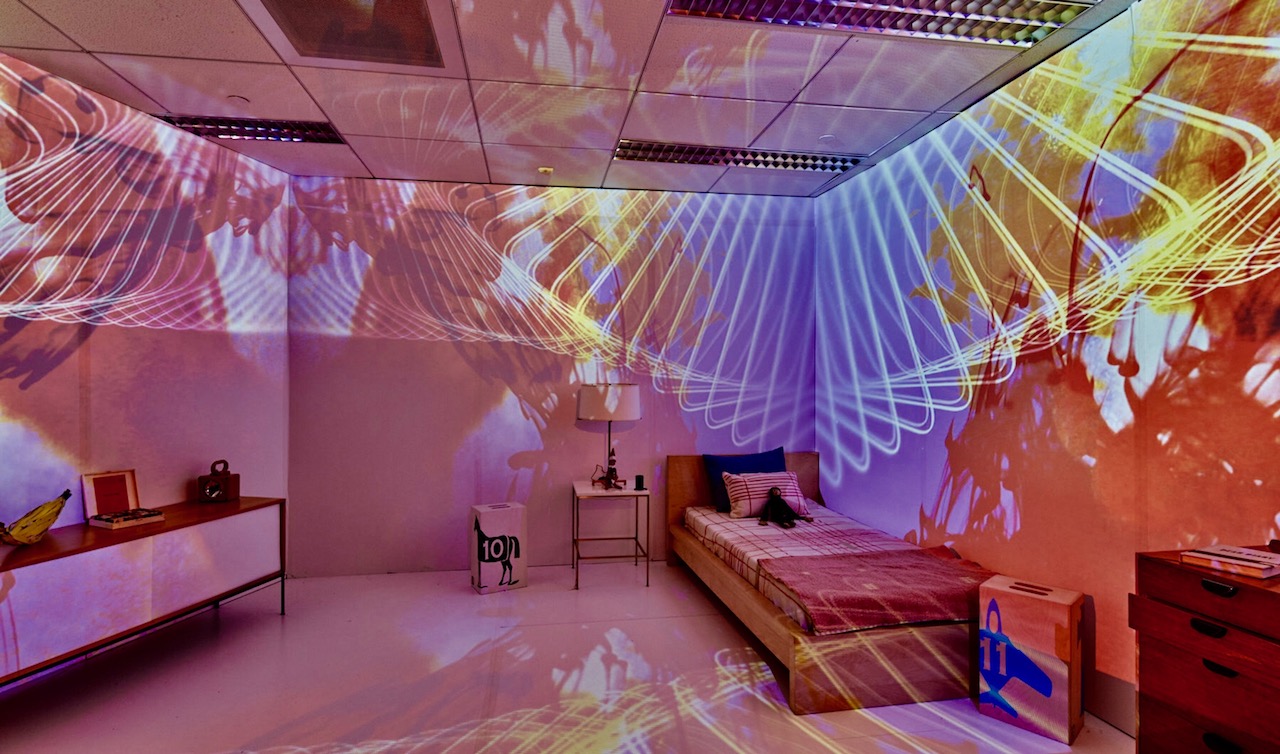 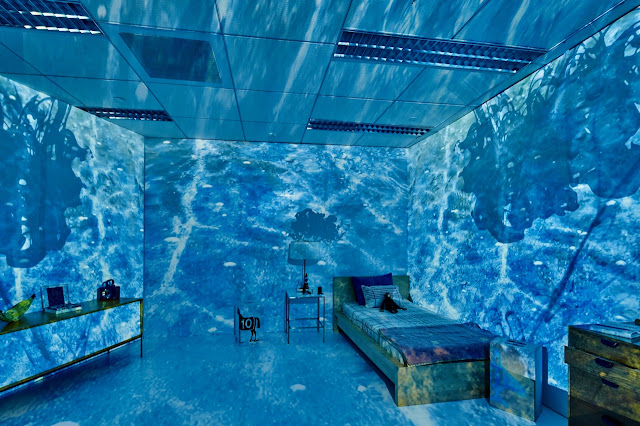 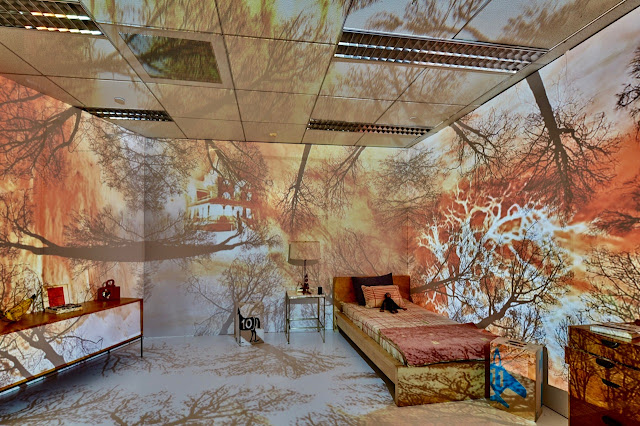 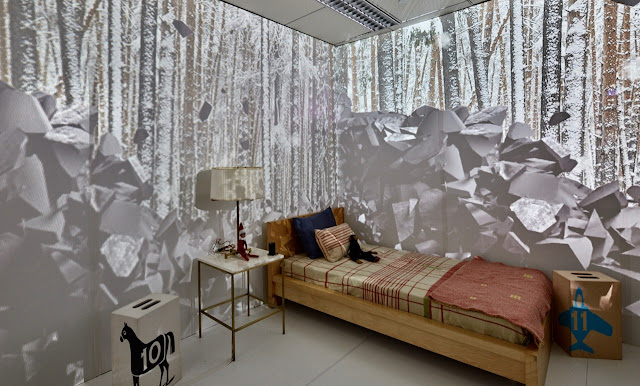 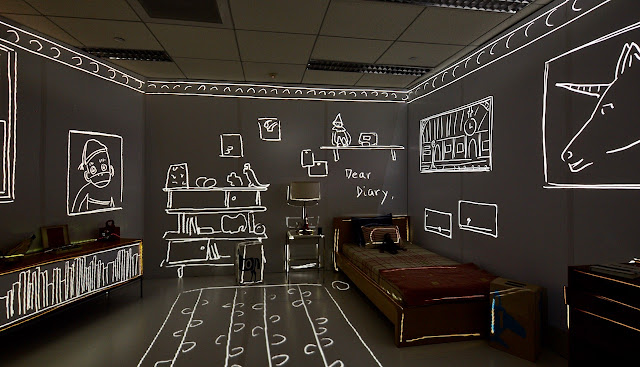 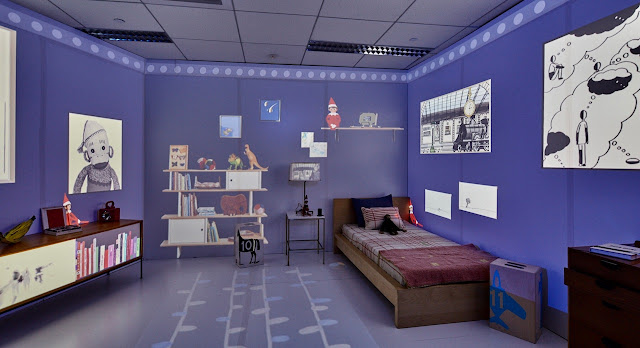 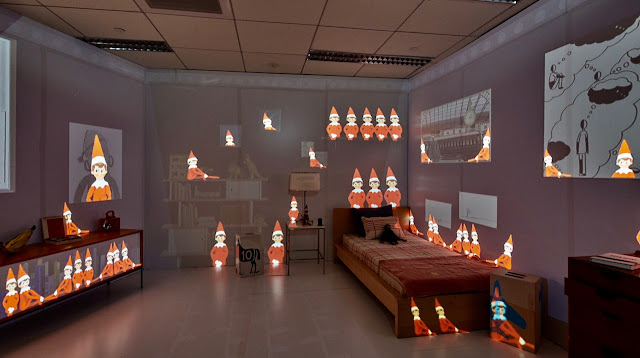 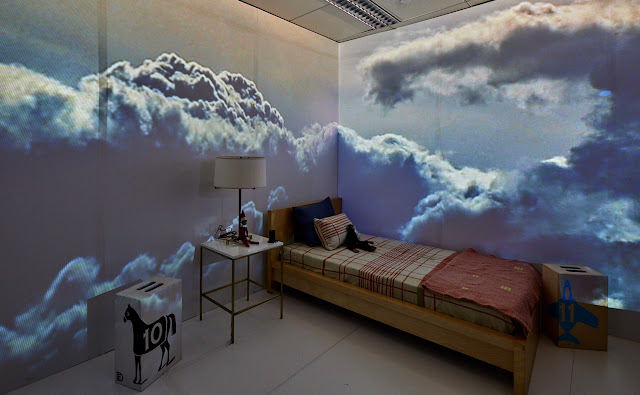